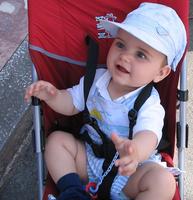 After graduation from Russell High School I attended college for a short time with very little success. In 1963 I received a military assignment to the Federal Republic of Germany and have lived there since. In August 1968 I was married to Karla Popp in Weiden, Germany. We have one son but until now no grandchildren. We are looking forward to retirement in 2003.