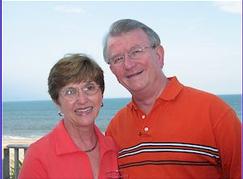 After my sophomore year at Ga Tech, Karen Walton and I were married (1960). On graduation (electrical engineering) we moved to Texas where I worked two years with Collins Radio Company designing and building electronic equipment for the Navy. In 1964 we moved to Florida where I worked for a small computer firm, Systems Enginneering Labs. I experienced a call to ministry in 1967-68, resigned my position at SEL, and entered seminary at Emory U in Atlanta. I have since served in the Florida Conference of the United Methodist Church as a pastor, 26 years, 5 churches in south and central Florida; a District Superintendent, 6 years; and as the first Director of the Office of Congregational Transformation, 4 years.

Karen and I retired and returned to Atlanta in August of 2006. Karen spent her last 5 years as Executive Director of Celebrate Jesus Missions, Inc. Give her a call and she'll tell you all about it! It remains to be seen how God will use us in retirement. I hope to do a bit of teaching and consulting with churches experiencing stagnation or decline.

We live close to Karen's Mom and Dad. We are part of their support system as they are in their 80's.